Like the bird mating rituals you’ve seen from Planet Earth, male performs courtship dance to attract female, butterflies do too. For the family of Longwing butterflies, male dances above his target in upward and forward motions to attract a potential mate. The Female stays still, opens her wings flat and raises her abdomen. The male flips the wings more rapidly, differs in his casual flying pattern and pokes his mate with his abdomen in occasion. The ritual lasts several minutes to a quick turn-off if the female is not in the mood.

This is a pair of Tiger Longwing butterfly (Heliconius hecale) performing a courtship dance. The subject is set in a more intimated tight frame. I used shutter speeds around 30-60th of a second to capture the actions and slammed a 2x on my 180mm to separate the background more effectively. The female is stationary, so the goal is not that complex — capture the male movement towards the female. The shoot is nearly there, the male is perfectly captivated showing the wings movement and direction of abdomen pointed downward. But I wish the female had raised her abdomen or better yet, both abdomens were touched or showing movement toward each other. 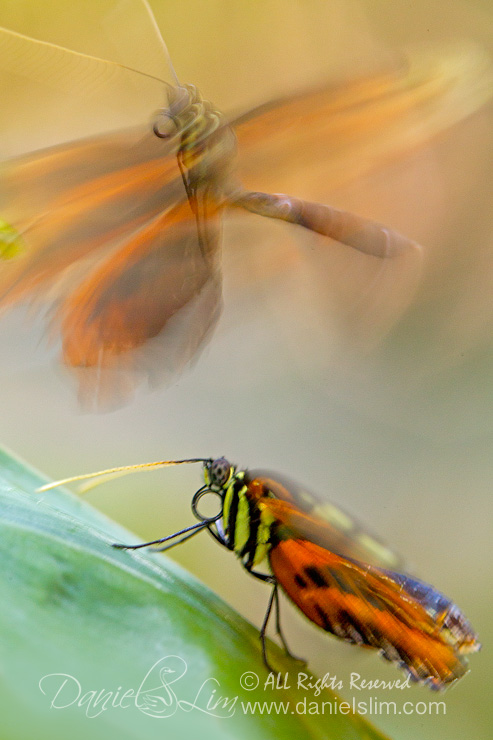